THE BHARATIYA Mazdoor Sangh was born at a time when big trade unions like INTUC, CITU, AITUC etc. dominated the labour movement. Born in 1955, BMS became the biggest cadre organisation of workers in 34 years because of the extraor­dinary organising capability and guid­ance provided by Shri Dattopant Thengadi ji. His subsequent evolution as the Bhishmacharya of Bharatiya labour movement is an example to emulate for all those who work in the labour field.

It was at the instance of Shri Guruji Golwalkar that Thengadi ji, working as a pracharak of RSS in 1949, turned his attention towards creating a labour organisation based on Bharatiya values and tradition. Instead of immediately starting an organisation, Thengadi ji decided to undertake a deep study of labour movement and for this purpose he joined a few organisations.

First, he joined the INTUC. In a short time, he became an office bearer of around 10 unions working under INTUC. In October 1950, he became a member of the national executive of INTUC. Also, he became the secretary of the INTUC in the erstwhile Madhya Pradesh State. Besides this, in the period between 1952 and 1955, he worked as the State or­ganising secretary of AIBEA, an organisation of Communist bank employees* During 1954- 1955, he was president of the central circle of RMS Employees Union (Postal) consisting of old Madhya Pradesh, Vidarbha and Raj­asthan. He was also president of the INTUC- affiliated employees’ unions of LIC, Railway, Textiles and Coal. He acquired first-hand in­formation about the functioning of trade unions and their agitations during this period. He also used the opportunity to learn more about Communism and gained sufficient knowledge about the way of functioning of communist organisations. In Shri Guruji's words, Thengadi ji single handedly completed the task assigned to him.

In the midst of this process, Thengadi ji came across many kinds of obstacles. He had cited one such incident. While working with a Communist trade union, Thengadi ji used to come back to Nagpur Sangh karyalaya in the evening after participating in agitations holding red flag. One day a few swayamsevaks told Thengadi ji directly that it was not proper for a person who is working with Communist movement to sleep at RSS office. However, when Guruji came to know about this, he asked Thengadi ji to come and sleep at his place. Then only the other swayamsevaks realised their mistake. It was during this period, when Thengadi ji was staying with Guruji, that he helped         DeenDayal ji in preparing the format of ‘In­tegral Humanism’.

The Bharatiya Mazdoor Sangh was found­ed on July 23, 1955 in Bhopal in the presence of 35 persons invited from different parts of the country. From the beginning onwards, Thengadi ji was keen to maintain democratic ideals among its workers. In this respect, while giving guidance to workers, he had cited one example. During the formation of the organ­isation, Thengadi ji and others had decided to name the new organisation as ‘Bharatiya Shramik Sangh’ and hence prepared a report on that basis before coming to the meeting. But at the meeting, the person from Punjab pointed out that they pronounce the word ‘Shramik’ as ‘Sharamik’ and suggested that it would be better to use the word ‘Mazdoor’. Then the senior representative from Bengal said that though there is no word called mazdoor’ in Bengali, in view of the feelings of the Punjabi brethren, ‘Mazdoor’ would be acceptable to them. Hence the organisation got the name ‘Bharatiya Mazdoor Sangh’.

The people who joined first in the initial days of BMS were mostly social activists with hardly any experience in the field of trade union activities. There was not a single union or a member during that period. In the first 12 years, there was not even an official national executive. Just an informal five-member com­mittee functioned at the national level. Thengadi ji regarded himself as the general secretary and travelled through the length and breadth of the country building unit by unit. Besides, he gave an ideological foundation to the new organisation.

During this period, Thengadi ji had the blessings of Guruji who was in constant touch with him. He advised Thengadi ji to love the workers like a mother loves her children. In I960, when Gulzarilal Nanda was the Home Minister, the Government tried to crush the strike organised by government employees. Shri Guruji asked Thengadi ji to give the opinion of the BMS about the strike. Thengadi ji replied that the BMS has no union among government em­ployees. Then Guruji said that even so, the stand of the BMS on the issue should come to light through Sangh mouthpieces like ‘Panchajanya’ and ‘Organiser’. Guruji also gave a clear message in this respect: ‘the right to strike from work is inherent in the right to work. When an alternative way is found other than strike, the concept of strike will lose its relevance’. These words reveal the deep un­derstanding that Guruji had of the labour issues.

Thengadi ji had faced several difficulties while being part of the labour movement. Once Thengadi ji was asked to deliver the welcome speech at a united rally of trade unions in Bombay attended by veteran HMS leader N G Gore. In the last minute, N G Gore announced that he would not sit on the same dais where an RSS pracharak was present. Since the proceedings had been predetermined, Thengadi ji delivered his speech and left the venue immediately without show­ing any remorse. Years later, during the Emergency, Thengadi ji was once tasked to take Gore into safe hiding.

Within a few minutes of meeting each other, Gore expressed his regrets about the earlier incident.

In all executive meetings, Thengadi ji used to repeatedly ask workers to maintain the distinct organisational identity of BMS. He would even cite communist experiences from the autobiography of the veteran communist leader, A K Gopalan. He said that such experiences could happen to us as well if we are not cautious. His instruction about not to make compromises on basic ideology’ still resonates in the ears of Sangh workers. He had always tried to make personal friendship with people beyond the organisation and political philos­ophy. He had many friends among the Congress and Communist parties and had relationship with people working in different trade unions. When the clashes between the RSS workers and CPM men increased in Kerala, he came to Kerala with CITU leader P Ramamurti and tried to put an end to it.

Though many positions and power came across him, he rejected all of them with utmost humility. He retired from parliamentary work after being a Rajya Sabha MP for 12 years. In 1955 itself he decided that the BMS must remain an organisation without any political affiliation. Thengadi ji s presence had ensured that the basic philosophy remains till now. Though he was the secretary of the Lok Sangharsh Samiti during the Emergency, he refused the demand that the BMS should be made an affiliated organisation of Janata Party, which came to power immediately after the elections. It was Thengadi ji who taught the trade unions to react on the basis of the policies of the Government and not on the basis of the color of the Government. He called this as ‘Responsive Cooperation’.

In 1984, at the Hyderabad meeting, he declared war against multinationals and foreign agents. Thus he conceived Swadeshi Jagaran Manch that was formed later in 1991. Besides this, he also founded Bharatiya Kisan Sangh, Samajik Samrasata Manch and within the BMS, founded Sarva Pantha Samadar Manch and Paryavaran Manch.

He had visited many countries of the world as part of trade union work and otherwise. On April 28, 1985 when he visited China, the Beijing Radio broadcasted his 20 minutes’ speech in Hindi with Chinese translation.

Since 1991, when Narasimha Rao gov­ernment came to power, the labour policy and economic policies of ail the governments, whether of Congress, Left Front or NDA that ruled both at the Centre and in different States were almost the same. The Communist trade unions, which opposed these policies during the Congress regime, became inactive during the tenure of Deve Gowda and Gujral governments, which they supported. Those who thought that the BMS, which opposed the economic policies since 1991, would slow down when the NDA government came to power, were proved wrong. Both in the 1999 Nagpur meeting and in the April 16, 2001 rally as well as in the subsequent agitations, Thengadi ji came down heavily on the policies of the NDA government, which became a rare event in the history of modern politics and trade union movement.

The working of the Second Labour Commission took an anti-worker shape almost surprisingly. When Thengadi ji was informed about this, he asked us to prepare a disagreement note and come to Pune immediately. At Pune, in the presence of senior advocate Dharap, Thengadi ji attentively listened to the note and suggested necessary modifications. He remained awake at 11'O clock at night expecting my arrival for this purpose. This disagreement note became a part of the report of the Second Labour Commission. Hence once again, Thengadi ji’s guidance played a vital role in upholding the dignity of BMS in the history of labour movement.

His passing away happened at a time when his guidance is more and more required for the Sangh Parivar organisations. The ideological life that he lived would continue to shed light through the works of lakhs of dedicated people who are in the process of rebuilding the nation. 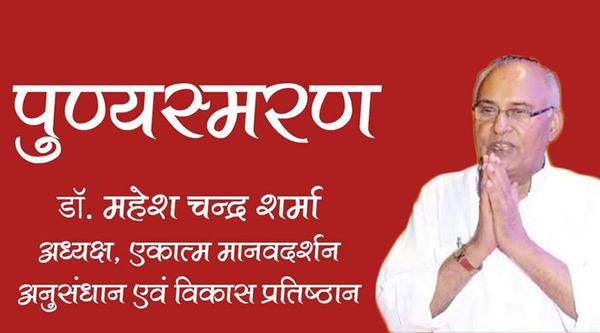 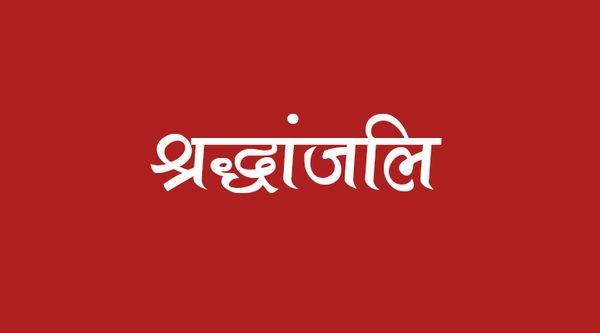 DATTOPANT THENGADI alias Dattatreya Bapurao has passed away. The long life of an uncompromising ideologue and an untiring worker of people’s welfare has come to an end. The founder