He built the largest trade union in  India, the Bharatiya Mazdoor Sangh. Formed in 1955 it over took INTUC,  the largest trade union, in just three decades. In 1989, strength of BMS  was 31 lacs plus. That was more than the combined strength of CITU and  AITUC, the monopolists of trade union movement. Today its membership is  over 83 lacs, more than the collective of most other trade unions. Yes,  he built the most powerful trade union. Yet, he was not a communist. He  actually opposed the communists, stormed their citadel and captured it.  Never a Socialist, but, he defeated them in their own territory. He  waged an open war, an ideological war, against them, and defeated them  in a straight war, not in guerrilla warfare. Also he never used his  strength, never called for a bandh, the normal weapon of large trade  unions, and never brought any city to stand still. His unions never  indulged in violence. He never made his unions the wing of any political  party.

Though a trade union leader, he was not  an urbanite like most trade unionists. He also built the largest union  of agriculturists in India, the Bharatiya Kisan Sangh. Still he was not a  village versus town man, or agriculture versus industry man. For him  nationalism was the melting pot of all sectional views and interests. He  never believed in the distinction between classes, between the rich and  the poor, but, actually stood for collective national interests. Thus  he carried nationalism to territories monopolised by class hatred and  class war and rendered class idea almost irrelevant. When globalisation  challenged India in early nineties and every one helplessly just opposed  it or blindly welcomed it, he recalled the spirit of the freedom  movement, the Swadeshi idea. He formed the Swadeshi Jagaran Manch [SJM]  which articulated an alternative indigenous economic model, not just  opposition to globalisation. It emerged as the bulwark against mindless  globalisation and succeeded in creating a vision for India as a global  power. His creations, the BMS, the Kisan Sangh, and the SJM, are known  and powerful in thought and action, but he, the creator himself, is not  known.

Who is he? Dattopant Thengadi, unknown to  most, founded institutions known and powerful but himself not known. He  passed away at 84, with energies that one would see in a man of 48. He  was of course a resounding success as a trade unionist. But this does  not exhaust Thengadi. He was more. He was an astounding intellectual  with remarkable grasp of history and economics, sociology and politics.  Yet he rarely appeared in public or even rarely allowed himself to be  photographed or interviewed by mass media. In his view nation builders  do better things than stand before cameras. Yet he was in politics, in  the Rajya Sabha for two terms. But that did not make any difference to  his definition of himself. He was an activist, who did what was doable  in ten lives in one. Yet massive activity did not interfere with his  contemplative genius. He found time amid chaotic activity to think, read  and write. He authored innumerable books of originality and high  intellectual content — some 50 books in all, 27 in Hindi, 12 in English  and 10 in Marathi. He has presented innumerable papers on profound  subjects in national and international conferences. He learnt five  languages apart from Marathi and English. He founded, inspired, managed  and advised over a hundred organisations! And found time for all  activities, yet time to talk and chit chat with thousands of ordinary  workers! He could discover the 25th hour in the day and the thirteenth  month in the year.

What inspired him to such unbelievable  mental, physical and intellectual activity beyond all known reserves of  human energy? What drove him to attempt and accomplish the un-attempted  impossible? The RSS. The much misunderstood and much maligned open air  university that trains patriots of high commitment in this country even  today. He became the full time pracharak of the RSS at the age of 22 and  continued to work full time till he breathed his last. No office  attracted him. He could have occupied any position in public life. But  for people like him positions added nothing.

He was a dhrista, a seer. Decades before,  he saw and theorised the collapse of communism as, he perceived, it  went against human nature. It has happened. He has also theorised that  capitalism too will collapse as that too is against human spirit and  nature. This is waiting to happen. Even in philosophising the resistance  to globalisation he foresaw national spirit as the greatest defence  against global forces. He unveiled the hidden element of globalisation  as the competition between nations. Result, not just in India but, all  over the world today the real resistance to globalisation comes from  perceived national interest, that is, Swadeshi at individual national  level.

Thengadi was understudy of Babasaheb  Ambedkar. ‘Gurumurthy, I do not agree with what Arun Shourie’s  conclusions on Babasaheb Ambedkar’, he once told me. I pointed out to  him that Arun’s book was fully completely documented. He asked me ‘do  you mean to say that the lives of people who had had to face the  greatest of challenges can be captured in records and documents?’ He  added that the complex times and the challenges that ‘Baba’ – this is  how he called Babasaheb Ambedkar – faced could not be read from records.  ‘In fact most of the recordings cosmetise the real facts, more bluntly,  they conceal, not bring out, the truth. So records cannot present the  challenging life of Babasaheb Ambedkar’. Tengadi could talk with  authority about Babasaheb Ambedkar because he was full time with  Ambedkar in the last four years of Babasaheb’s life.

What Thengadi told me further was  stunning. He said ‘I was eye witness to Babasaheb’s tensions and  problems’. He recalled ‘Babasaheb wanted the Hindu sants and religious  heads to declare openly that untouchability did not have the sanction of  Hindu religious scripts’. RSS efforts in this direction were not  bearing fruit. But Babasaheb told Thengadi that time was running out.  His health was deteriorating fast in 1954. Baba Saheb told Thengadi that  ‘I have faith in the process of the RSS in removing untouchability. But  that is too slow. I cannot wait because I will not live to see the end  of the problem’. Thengadi also recalled what made Babasaheb embrace  Buddhism, in Babasaheb’s own words thus: ‘if I did not show the way for  this helpless community they would be hunted down by Christian church  and the communists”. What Babasaheb wanted the Hindu religious leaders  to do in 1954, RSS could persuade them to do only a decade later, in  1965, in a conference of Hindu religious leaders in Udipi organised by  the Vishwa Hindu Parishad. This made many, me included, insist that  Thengadi wrote on his days with Babasaheb. A couple of months before  Thengadi died he did this too, and his book on Babasaheb Ambedkar was  also released.

He owned nothing, not a house or a  car, no cell phone or else. He lived in a small room in Delhi provided  by the BMS and in other’s houses elsewhere. His needs, a few kurtas and  dhotis, were accommodated in a suit case. He travelled in over night  buses and mostly second class in trains. Never thought of marriage as  his time was exhausted by the cause he had taken up in life. A rishi, a  tapasvi, he was. Like most tapasvis, he is also little known. National  newspapers which waste thousands of tons of newsprint on what retired or  topless cine stars do in the morning and evening never even reported on  this great man’s work, much less on his greatness. Having seen him  closely and known him intimately and learnt from him immensely, the only  thing I could do is to let a few others know that a tapasvi died on  October 14, 2004 unnoticed by the media. 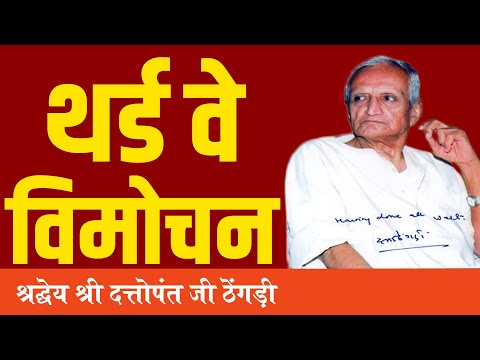 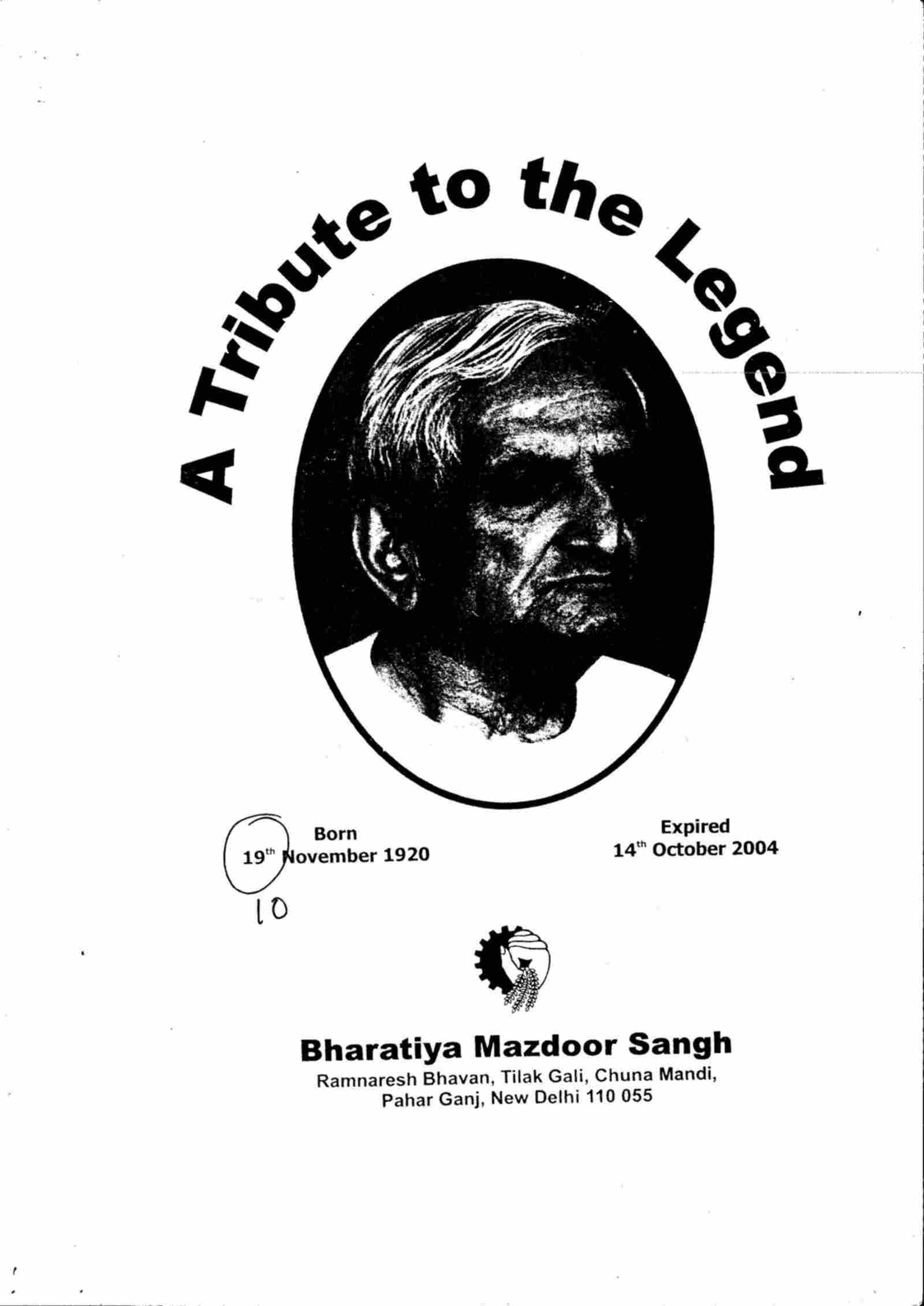