Last summer when I met late Dattopant Thengadi in   Delhi, the veteran RSS leader was busy completing his work on BR Ambedkar in   Marathi. We discussed Ambedkar whom he characterised as a social   revolutionary. He differed with those who evaluated him from a narrow   politico-nationalistic perspective. This was perhaps the last contribution of   Thengadi to the nation's academic and ideological discourse. He was happy   after completing his work, which he considered would remove a number of   misunderstandings about Ambedkar.

Thengadi's journey in public life began   with his introduction to the RSS at the age of 12. He became an RSS pracharak   and contributed enormously to the expansion of the organisation and   elaboration of the Sangh's ideology. However, his importance was not confined   to the Saffron worldview. He created history in the field of trade unions,   which is considered a monopoly of Left ideologues. The second RSS chief, MS   Golwalkar, entrusted him with the responsibility of working among workers.   Thengadi joined All India Trade Union Congress and worked there for a few   years to learn the tools of trade unions.

In 1955, he founded Bharatiya   Mazdoor Sangh (BMS). By 1973, the Left and centrist trade unions were forced   to acknowledge the strength of the BMS,which joined them in the strike   against Life Insurance Corporation on an equal footing. In the 1990s, the BMS   emerged as the largest trade union in the country. Thengadi's contribution   was that he changed the conventional paradigm of the trade union movement. He   propounded a new concept, "Labourising the industry and nationalising   the labour" which impressed many communist trade unions including the   Chinese.

In 1978, he founded the Bharatiya Kisan Sangh (BKS). which is now   the most active peasants organisation. With the emergence of the WTO,   Thengadi realised the need to raise the consciousness of the people of   developing countries against MNCs and Western economic interests. He was a   founder-member of the Swadeshi Jagaran Manch (SJM) in 1991. There were a few   other organisations too which he built. The modest activist, Thengadi   encapsulated all his contribution on ideological and organisational plane as   "progressive unfoldment of Dr Hedgewar's vision".

Thengadi   introduced economics in the saffron ideological stream and broadened the   plane of cultural nationalism. He believed that a nation must rely on its   strength and that is why he campaigned against the WTO and MNCs. It was not a   narrow perspective of economic development but a quest for a new ideology   which prevents the dominant economic forces to exploit the developing   countries.

He wrote the Third Way in which he dealt with the evils of   capitalism and communism. Thengadi wrote, "After the collapse of   communism and with the decline of capitalism within sight, it was but natural   that many well-meaning patriots in Bharat should come forward with a   suggestion that our country should now fulfil its historic obligation of   presenting the world with the only way out, in keeping with the spirit of our   culture and Dharma." (P97) He identified himself with the common people   which was reflected in his life.

During my last visit to his residence, I   suggested he install an air-conditioner or at least an air-cooler, which he   refused and said, "I should enjoy only those facilities which are   available to our workers at the district level." Those who wonder about   the success of the BMS or the BKS can well understand that ideology expands   only when its propounder and ideologues live the life for which they stand.   His final message to the people of the rival camp, the Indian Leftists, in an   article after the formation of the UPA Government, was that the division   between the Left and Right is irrelevant in the Indian context.

He worked to   expand the RSS in Kerala and West Bengal before Independence. For a decade,   he was in the Bhartiya Jana Sangh and also remained a two-term Rajya Sabha MP   - a period when he made several communist and socialist friends. When   Emergency was imposed in 1975, he went underground. After the arrest of   Jayaprakash Narayan and Nanaji Deshmukh, he was given the charge of Lok   Sangharsha Samiti, which was formed to lead the underground movement against   the dictatorial regime.

Thengadi wrote a number of books. When I delved into   archival material for my research, I found his article in the Hitavad   datelined 1940. His book Rashtra delineates the concept of nation,   nationality and culture. Even at age 84, he was least concerned about his   health and constantly vigilant about the ideological direction the nation was   taking. 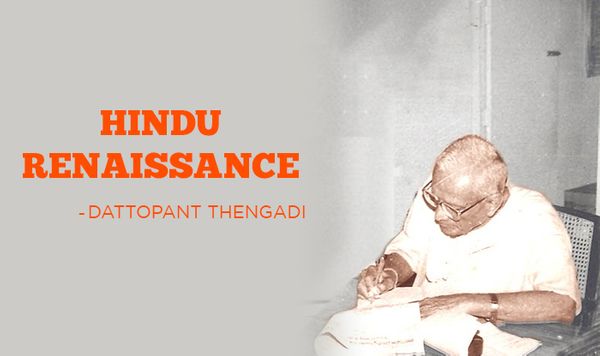 (Hindi rendering of the Third Way, a book written by Dattopant Thengadi, is going to be released by Shri K.S. Sudarshan, Sarsanghchalak of Rashtriya Swayamsevak Sangh. Much water has

“Piousness, forgiveness, energy, courage and humility, are his virtues who has come with heavenly wealth with him.” – Geeta {chapter 16) The Chapter 16 of Lord Krishna’s Bhagwad Geeta describes