SHRI DATTOPANT Thengadi is no more with us. His loss is felt not only by those individuals who were nurtured by him but everyone who is really concerned about the welfare of humanity and wants all kinds of exploitation to be stopped immediately, considers his sudden departure both social and a personal loss.

Thengadiji was an inspiration to all such individuals. He was a living example of an ideal social activist. People like me who were fortunate enough to interact and work with him for a long. period of time can always cherish the memories stored and lessons learnt while working with him. For others who were not so fortunate, his words would always resonate in their minds to guide them to keep moving ahead on their path without ever bothering about the outcome.

Dattopantji was one of the very few post-independence social activists who could influence the polity through non-electoral methods. He had a deep grasp over development of events, whether national or international, and a deeper understanding of dynamics of those events.
Combination of superior intellectual ability and energetic physical activism made him a force in himself. This powerful force stored in his strong body and even stronger mind was strengthened by his grass-root level workers and situations.

Due to this harmonious blending of a superior level, he occupies a very high position among the galaxy of great nationalist leaders. In the RSS chain of leaders Guruji, Deendayalji and Thengadiji form a triumvirate for their ideological strength, organizational efficiency, very simple nature and a spiritual bent of mind. These three ‘great personalities had much more in common other than the characteristics mentioned here. This RSS triumvirate will always be remembered for their soul-stirring personalities, sharp intellect and lucid articulation of ideology.

He was a true Rishi. Intellectual honesty and total transparency in behaviour accorded him a status which was available to only a few. He was a staunch critic of communism but won many friends among communists. He would always tell- fight the sin, not the sinner. He never accepted the Left and Right division in the Indian context. He would say, ‘capitalist and communist divide is not relevant in India’. According to him, nationalist paradigm should always be there and welfare of all should be the core of every movement.

He could have opposed the imperialistic or hegemonistic globalisation by resorting to negativist movements of anti-globalisation or anti-imperialisation but he articulated the positive alternative in the form of Swadeshi from the core of our national consciousness. It was a true response of a true nationalist that has global impact now. He gave form to a powerful movement and called it second freedom movement in the national perspective and third World War in the global perspective. He strongly believed in the ’Third Way’, much beyond the narrow confines of capitalism and communism and gave it an ideological shape on the basis of Integral Humanism and Swadeshi. It is becoming evident now that this will be the core of all future movements in different countries and the whole world will accept the ’Third Way’ as the most humane way of sustainable socio-economic development in the coming years.

His range was unlimited. He spoke, written and worked on almost all the relevant issues like economics, society, politics, literature, environment, human rights, religion, spiritualism etc. Many people have written about Dr. Ambedkar, either derogatory or trivializing his role in freedom movement and reconstruction of nation. Thengadiji used to feel extreme pain due to this. For him, Dr. Ambedkar was a hardcore nationalist, a harmonious internationalist and a true social reformer. Before he left all of us, Thengadiji completed an exhaustive book on Dr Ambedkar to truly project his life and work.

He was the only one to transform the trade union movement into a nationalist movement. More importantly, he accomplished this difficult task while working amidst the big names of trade union leaders who were associated with the leftist organizations. For more than six decades he was continuously on the move for the service of the nation and worked as RSS Pracharak in almost all parts of India, from Kerala to Assam. Very few people can match his vast experience in organizational work. He had a very simple formula for judging success and failure of a movement, ‘if you want to destroy the movement, develop comfort-loving cadre and status-conscious leaders’. For all workers of ideology-based organisations, his mantra was, ‘it is better to be irresponsible and right then responsible and wrong’.

He leaves behind a heritage that we have to sustain and enhance. It is not easy to fit into the shoes of such great personalities but his deeds and words will always guide us. He would always tell his fellow workers that ideological commitment should remain supreme and one should never compromise with it. He would tell us, ‘of what avail, if in the process of winning the kingdom of earth, you lose the kingdom of heaven?

Greatness of a person is generally recognized only after the departure of such holy souls. I hope a sincere effort for true evaluation of Thengadiji’s personality would be made now, unfortunately when he is no more with us. 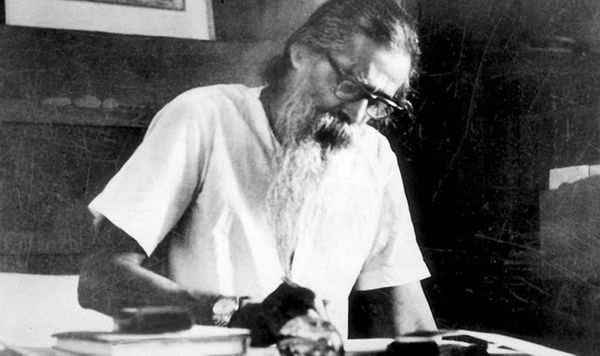